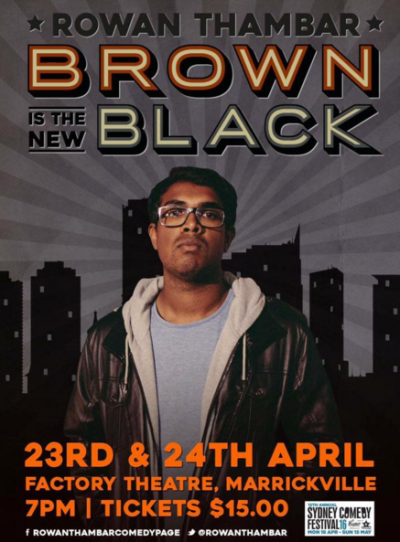 We first discovered Rowan back in 2014 when he brought his signature wit and humour to the masses with his comedy show ‘Brown Identity’.

And now the 21-year-old rising star is back with his second Sydney Comedy Festival show.

Taking inspiration from his Sri Lankan background and upbringing in Australia, Rowan uses stand-up and musical comedy to get audiences laughing.. and seriously thinking.

We caught up with Rowan to chat about his upcoming show Brown Is The New Black ahead of the Sydney Comedy Festival later this month.

I AM STARSTRUCK: How does it feel to have your second show in the Sydney Comedy Festival? How will this differ from last year’s?

ROWAN: It feels great! I’m glad they’re having me back. I had such a great time last year, I’m very excited for this year. It’s an entirely new show, whole new hour of material which I think people can really connect with.

I AM STARSTRUCK: The show is titled ‘Brown Is The New Black’. What is your theme for this show?

ROWAN: The theme for this show is about being cool – and how dumb and annoying and unavoidable it is. I hate how everyone wants to be cool, even those that are trying not to be cool, think it’s cool to not be cool. It’s this endless loop that drives me insane. My cultural background is a part of the show but it isn’t the main focus. It pops up every now and then.

I AM STARSTRUCK: How have you been preparing ahead of the comedic extravaganza?

ROWAN: I’ve just prepping most of the stuff in clubs and open mics. I got to do some shows in New York City in August last year for a couple of weeks and I felt like I learnt a lot in those weeks, so I’m excited to see how it translates to my one-hour show.

I AM STARSTRUCK: What can viewers expect from the show?

ROWAN: The audience can expect to laugh, have fun and maybe think a little. That part is optional, but it’s important as well. But I think people will come away being like “It was good to hang with Rowan”.

I AM STARSTRUCK: Where do you get your inspiration for your comedic acts?

ROWAN: I try to focus my writing on stuff that affects my life or that I see affects my friends and family. I try and write what I know.

I AM STARSTRUCK: Are there any comedians who have inspired you when developing material for your new show?

ROWAN: I’m a big fan of Louis C.K., Aziz Ansari and Hannibal Buress. I think those dudes are fully sick at what they do.

I AM STARSTRUCK: If you could collaborate with any comedian in Australia/overseas, who would it be?

ROWAN: I guess it’d be one of those dudes. I would love to do stuff with people like Nazeem Hussain, Matt Okine and Ronny Chieng here in Australia though, those dudes are killing it!

Rowan’s debut Sydney Comedy Festival Show ‘Brown Is The New Black’ will be taking place on April 23 and April 24.