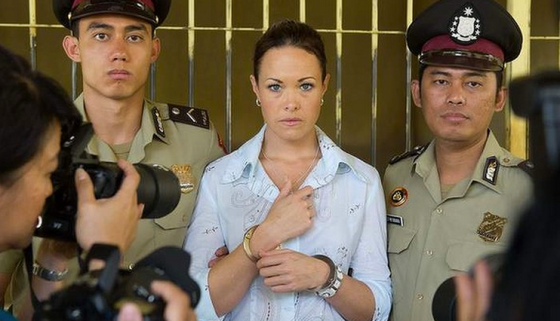 For a decade this name has left Australians transfixed, fascinated and obsessed.  It is a name that threw Australian media into a frenzy that has only escalated as the years have passed.

On October 8, 2004, Schapelle Corby was arrested at Nquarh Rai airport in Bali for possession of 4.1kg of marijuana in her boogie board bag.

Whilst the 27 year old at the time insisted she had no knowledge of drugs in her luggage, the authorities were not on her side.  A sentence of 20 years in jail was officially set on July 27, 2005.

After eventually being slashed to a 15 year sentence, Schapelle’s jail time will officially end in just a matter of days.  She would only have spent just over 9 years in prison as Indonesia’s Justice Minister Amir Symasuddin signed her parole papers this week.

Whilst Schapelle will not be able to return to Australia until 2017, she will be able to live a relatively free life, residing in her sister Mercedes’ house in Bali and reporting to parole officers periodically.

There is no doubt that the Schapelle Corby case has been one of the most high profile Australian drug crime cases in the media landscape.  Journalists from leading television networks and editorial publications are in Bali this weekend to report on developments in Schapelle’s case as she prepares to finally leave prison.

And that’s not the only media attention.

In what is being dubbed the must-see television event of 2014 (and we’re only in February), Channel 9’s telemovie, Schapelle will be screened tonight.

The telemovie will revisit the past decade that has changed Schapelle Corby’s life and dramatise the series of events that have taken place post her conviction.

Expect lots of drama (that is an understatement), complete with memorable Corby family moment of Mercedes Corby lashing out at Australian media, Schapelle fainting as she leaves prison and tapping her head in desperation as she is sentenced to 20 years of jail in court.

Here is a sneak peek of the telemovie.  Make sure you tune in at 8:40pm tonight on Channel 9.