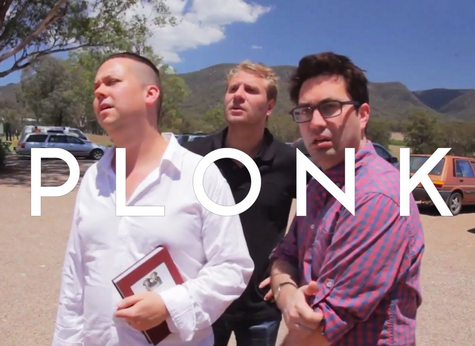 No that’s not a typo.  In fact it is Aussie lingo for one of the most sophisticated beverages, wine!

New Australian web series Plonk takes a look at the wine making industry, but this is no ordinary “documentary”.

Brought to you by the mastermind behind The Chaser, Nathan Earl, Plonk delivers a satirical take on the vineyards of New South Wales with the signature wit and comedy of his other productions.

“You’ll expect at least some comedy and some laughs, but we’ll add some extra laughs in the edit,” joked Earl at the series’ media launch in Sydney this week.

Being a show within a show, Earl and his leading cast of Chris Taylor (The Chaser) and Joshua Tyler travel to some of NSW’s most prestigious wineries, in a bid to make a “documentary” about the industry.

At the media launch held at Sydney’s Palace Verona, Paddington on Tuesday night, executive producer Glen Condie said the show is about educating the audience about wine and more so poking fun at the cast, not the winemakers.

“To most people wine is about having a good time.  So we wanted to bring that message to a lot of people using comedy.. we go to some great regions, meet some great winemakers and do some great things.  The humour is always on our inability to make a wine show, it’s never on the great people of winemakers,” he said.

With support from Destination NSW, the show was well received by a laughing audience of 150 media VIPs on Tuesday.  Big names who joined the cast and crew included Kris Smith, Anna Bligh, Andrew Hansen and Indira Naidoo.

If you love the sheer brilliance of Australian comedy and don’t mind a glass or two of wine, make sure you check out our video below from the Plonk media launch.

Get excited for Plonk’s online launch on Monday 10th February at  http://www.youtube.com/roadtoplonk