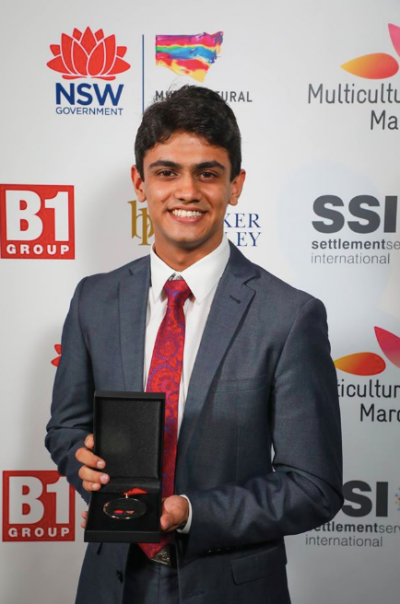 He may have won the Youth medal at the Premier’s Harmony Dinner earlier this year, but cultural diversity advocate Khushaal Vyas says it’s his local community who deserves the recognition.

The 21-year-old, who’s been recognised for his involvement in the development of the Fairfield Youth & Community Centre, has defended the suburb’s “hard-working” residents after former politician Mark Latham called Australian multiculturalism a “disgrace” following a visit to Fairfield.

“Mark Latham recently came out to Fairfield and gave us the biggest lambasting in the world by saying that no one speaks English here and that multiculturalism is failing,” Khushaal tells ‘I Am Starstruck’.

“Fairfield and [nearby suburb] Cabramatta are probably the biggest beacons of showing how multiculturalism is something that is just amazing,” he adds.

“Literally every continent on Earth is represented in that area,” the UNSW Arts/Law student continues, and says it is these groups of people who are the ones who are keen to contribute to the country through hard work and sacrifice.

“These are the same people who are working hard at any bakery or any workplace ever to send their kids to school, to make sure they’re the people who can contribute back to that country,” says Khushaal.

“Those guys are the ones doing some incredible work and all they get in return is some coverage from Mark Latham saying that they can’t speak English, without any recognition for their sacrifices, and what their kids and families contribute to the country.”

Last month former Labor leader Mark Latham made headlines when he slammed Australian multiculturalism as a “disgrace”, because several people he had chosen to speak to in Fairfield couldn’t speak English.

But Khushaal believes Latham has got it all wrong, and that multiculturalism is one of the nation’s biggest assets.

The 21-year-old’s been recognised for his involvement in the development of the Fairfield City Youth Centre.
Source: Multicultural NSW

After having been presented with the Youth medal at the Premier’s Harmony Dinner in Sydney in March, the Wetherill Park resident says he’s only more determined to advocate for the rights of ethnic minorities.

“This sort of thing, winning the medal or award, is a push me to be more proactive in terms of that advocacy space from now on,” he explains.

And as for the award itself, Khushaal would happily hand it over to his community any day.

“Look at the amount of sacrifices they have made… they all deserve more than any medal,” he says.

His award also recognises his work with the Wiradjuri community in Dubbo through UNSW.
Source: UNSW Law