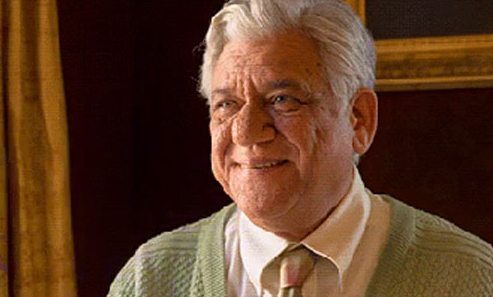 An array of stars have taken to social media to pay tribute to late actor Om Puri following his tragic death on Friday.

It’s reported that the 66-year-old suffered a heart attack at his home in Mumbai.

Om Puri has starred in a string of Indian films, but I personally loved his role in Hollywood blockbuster The Hundred Foot Journey, proving that the more senior generation of Bollywood can make the transition to the West with much success.

Take a look at some of the celebrity tributes below.

Right before I took this picture we were rehearsing a scene that we were about to start shooting. He whacked my script down to the floor and shouted, "don't do it like that!… Surprise them. Do it the wrong way, damn it!" — his wisdom could shake a room. He was a close friend and throughout our time working together, he taught me more dirty jokes and pranks than I'd need to last two lifetimes. My thoughts about Omji right now are indescribable. I love you Omji. Your talent and your prolific work as an actor will forever resonate with the world. You are a master at your craft, a legend and a mentor who taught me more about acting and life than any classroom ever did. Rest In Peace, Papa. #OmPuri

The end of an era …. The legacy lives on.. RIP #OmPuri #roma #mrMalik #don

Very saddened by the news of Om Puri ji's passing. Worked with him on many films and learnt so much from him. Immense talent. #RIPOmPuri

Deeply saddened to hear about #OmPuri sir! He was such a huge part of the core of Indian cinema..RIP ! Truly and end of an era..

Really sad to hear #Ompuri sir is no more,a genius performer ! My thoughts n prayers are with his family 🙏

Sorry to hear of the passing of an amazing actor #OmPuri ji . Had the opportunity of working briefly in A Hundred Foot Journey ..

Sad to hear about the passing away of the very talented Om Puri, my co-actor in many films…heartfelt condolences to the family. #RIP

The Prime Minister condoles the passing away of actor Om Puri & recalls his long career in theatre & films.