With the filming of Brett Lee’s new flick UnIndian well underway in Sydney, we caught up with Nivea from Sydney-based Bhangra group Heera Punjab Diyan (HPD) after they spent the day as extras on the film’s set in Western Sydney last week.

I AM STARSTRUCK: What was it like being on the movie’s set?

HPD: A lot of fun! My Bhangra team, Heera Punjab Diyan or HPD for short, and I, all registered for the late afternoon shoot.

As we’re a new team on the Sydney Bhangra scene, we were looking at the event as a team bonding session, as well as a bit of exam-time stress relief for us girls, all secretly just dying to let loose and dance like maniacs, while throwing fistfuls of coloured powder at one another. It was all really exciting.

I AM STARSTRUCK: What were you required to do during the shoot?

HPD: We signed up as extras and were told we would be required in their Holi dance sequence, and to just hang around and enjoy the shoot until then, and that’s exactly what we did!

Every now and then we would be given direction by the film crew to wander from point A to point B, in the background of a scene. So we’d be walking up to one of the stalls, miming the elaborate purchase of a set of bangles etc, while a critical scene was playing out with Akash Khurana and Tannishtha Chatterjee about two metres away from us.

Between shoots we just took the opportunity to chat to different members of the crew, finding out what was going on, taking in the scenes and feeling the festive vibes.

Eventually when our scene was required, we were told that we just needed to throw colour upon one another, dance our hearts out, and have a great time. The only rule (which proved to be difficult for some) was to NOT look at the camera. Other than that, it was just to have a good time and make the most of the unlimited supply of coloured powders and water guns.

As a professional Bhangra team, we took this opportunity, with the cameras rolling, to show off a few of the moves we’ve been working on over the last few months.

We put that Punjabi twist on your typical south Indian Holi scene. We even taught Mike Dalton, a reporter for Channel 9 news, who was on set and part of the Holi scene, a few Bhangra moves of our own. So he walked away with a little more than your standard – ‘pet the dog, change the lightbulb’ routine. 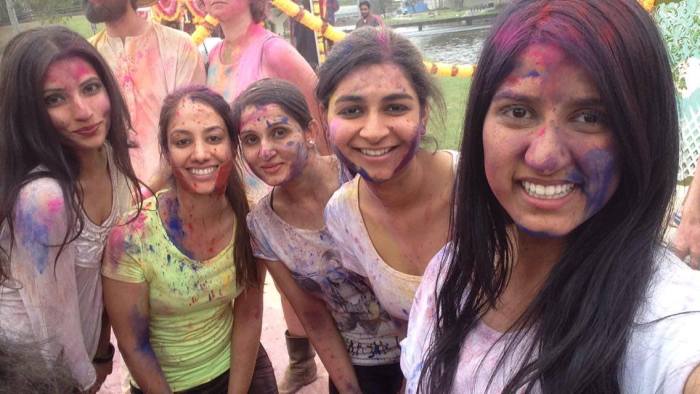 I AM STARSTRUCK: What was it like meeting the film’s big stars?

HPD: Everybody there, cast and crew alike, were all so friendly and simply radiated positive energy. We were surprised to walk onto the set and straight into a scene, where we surpassed to realise a few seconds later, that Brett lee was standing about four metres in front of us. We could basically touch him! It was such a great atmosphere!

I later had the opportunity to go up and have a chat with Brett Lee. He was incredibly chilled out and friendly and had his gorgeous wife and adorable kids by his side most of the time between shoots.

As for Tannishtha Chatterjee, she was in these 6 inch cork wedges for the duration of the day’s shooting. I mean from 8am-6pm, and on uneven grassy terrain…that couldn’t have been comfortable, so we totally felt for her.

To be honest, we’d all have to agree that the biggest star there, in our eyes, was Supriya Pathak, who played Deepika Padukone’s mum in Bollywood film Ram Leela. She also also starred in other hit films, like Wake Up Sid, and Delhi-6. Unfortunately she disappeared right after her scene was shot, so we were sadly robbed of the opportunity to be her groupies for the day. 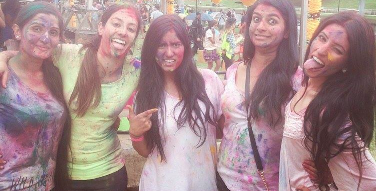 I AM STARSTRUCK: What was your personal highlight of the experience?

HPD: Right after our Holi dance scene, two of us were selected by the directors to act alongside Nicholas Brown (who has starred in Home And Away and Packed To The Rafters) in a quick scene.

What would have been about 15 seconds on screen, required proper direction- with us being told exactly how to react with the camera and characters on set. This scene also required at least six takes, as we could not help but giggle at the cheesy lines Nicholas’ character was churning out.

Unfortunately I can’t give you any spoilers, as our 15 seconds role was leading into a pivotal scene in the movie, so you’ll all just have to stay tuned for its release, and keep your eyes peeled for our MINOR acting debut amidst all the Holi madness.

Stay tuned for the release of UnIndian in 2015, and in the meantime say balle balle and get ready for HPD who are only set to take the Sydney Bhangra scene by storm.