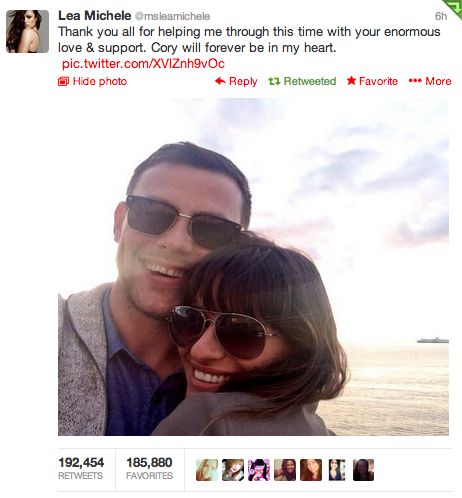 The year old actress took to Twitter a couple of hours ago, thanking fans for their support.

“Cory will forever be in my heart,” she said.

Monteith was found dead in a hotel room in Vancouver, Canada on 13th July.

Authorities later revealed that the 31 year old actor’s death was caused by  an overdose of alcohol and heroin.

EXCITEMENT ALERT – Editor Leeshie has been nominated in the 2013 Mamamia Most Clickable Women Awards! Voting oting opens at 9am on Monday 29th July and ends 11:59pm on Friday 2nd August.  We’d love your support so click HERE to check out Leeshie’s profile and vote! x